A fresh start for spring 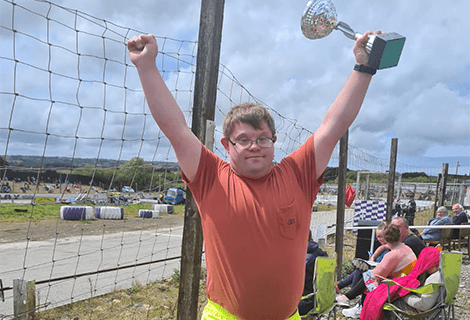 As the third lockdown comes to an end, we can begin thinking about the things we’d like to do this summer. Last year, one of the people we support, Mark, inspired us all to try something new when he celebrated the end of lockdown by attending a banger race, one of his favourite sports.

Mark experienced a lot of change last year, between the pandemic and moving into a new supported living apartment with eight other young adults. Planning things to look forward to really helped Mark get through the tougher months, so as soon as it was safely possible, staff arranged for Mark to attend banger racing, one of Mark’s favourite sports.

Supporting people to be themselves

Mark is a sociable person and he’s always keen to go out and meet people. In particular, he loves banger car racing. At the end of the first lockdown, Mark’s support workers found a local banger car meet at United Downs Raceway, and arranged for him to attend once they restarted the races (which were socially distanced).

Team leader, Lorna Wood, explained: "Mark was thrilled to be going, it really lifted his spirits. He made so much noise and excitement with each race as it played out in front of his eyes – he was the happiest and most excited we’d seen him."

Mark made such an impression on the drivers and winners at the race, that they invited him onto the podium when they accepted their trophies.

Lorna continued: "Mark spoke of nothing else since and was so fulfilled to have been made to be so welcome."

Buoyed by the experience and talking of nothing else, the team supported Mark to return. He was made to feel just as welcome and included. In fact, the winners did it again, inviting Mark on to the podium, only this time the excitement went stratospheric as Mark was given the winners' trophies which now take pride of place in Mark’s apartment and are enthusiastically shown to all his visitors.

The organisers said his reaction meant so much that they are hoping to create a role for Mark at the race days once restrictions have eased, so watch this space.

Lorna concluded: "It’s about what the people we support want to achieve; I enable them to take measured risks. The world would be boring if we didn’t take risks, and it's how people learn.

"If they make mistakes, we will be there for them. No question. Especially the lads I support like Mark; they are young people and they want to be just that. Young men exploring life and the world they live in. But we are there to help catch them.”"

Could you inspire people like Mark to achieve their dream or goal? Find out more about our latest jobs.