At one flexible support service in Wiltshire, they're keen to enable everyone they support to take part in the sorts of activities that most people take for granted. In December 2018, they took a group of people ice-skating to the largest outdoor rink in the south-west.

The group were mixed ages and had a range of physical needs. The biggest challenge was making sure that everyone felt safe enough on the ice to take part. Without this, the day could have gone very differently.

With many of the group anxious about the reality of skating on ice, taking time to plan responsive support was essential. They were worried they might fall over and hurt themselves. To tackle this, the team arranged for the group to skate in wheelchairs. Not everyone chose to use them, but they enabled everyone to have the confidence to join in.

Attending in wheelchairs meant staff needed to be physically able to support the group on the ice to enable everyone to enjoy the experience. Staff worked in shifts to push the wheelchairs and give everyone the opportunity to spend as much time on the ice as they wished.

The session lasted 45 minutes and most people stayed on the ice for the whole time. When the group left the ice, tired but happy, it was clear from everyone’s face that they’d had a great time.

Here’s what they had to say 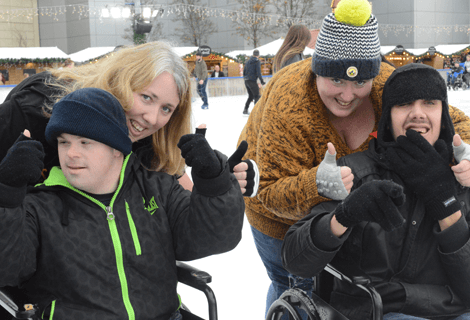 Nicola said: “I really enjoy going ice skating, I like that I can sit in the wheelchair and be pushed around so I am safe while having fun.”

Jonny said: “I like being pushed around fast on the ice and waving to everyone as I go past them.”

Rob said: “I tell the staff to go faster! I can't wait for it be organised again this year!”

Team leader Kirstie, said: “This is a great activity that everyone looks forward to each year. We've been in both rain and shine, but everyone has a great time no matter what the weather. Lots of the people we support aren't confident enough to use skates on the ice so we get around this by hiring out wheelchairs so everyone can be included in the fun but also feeling safe at the same time – the staff all get roped in to push and they sometimes nearly end up on their bums!

Everyone enjoys the Christmas atmosphere of the day with the music, ice castle, and Christmas stalls, and especially the McDonalds or KFC that everyone has after the skate!”