How I’m keeping friends and family together 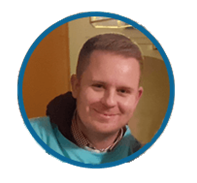 Steve is a locality manager for Brandon; he’s worked with us for four years and began as a team leader. He tells us about his journey in setting up a brand-new service for a group of young people in Yate.

As a firm believer in person-centred support that meets the needs of individuals, it’s always been important to me to include the whole family too. This hit home when I was watching a recent Channel 4 documentary, Home Free, about a group of people with learning disabilities moving into their own homes for the first time. As their parents anxiously watched on as their 'babies' flew the nest, it was impossible not to empathise with the families and people being supported. It’s something I’m taking with me as I begin setting up a brand-new service in Yate.

We’ve worked with a group of young people for a long time now, and they’ve developed a strong bond with each other as well as made some great friends in their community. As they approached adulthood, their families wanted to find a way for them all to be together. That’s where this project comes in. The aim is to create a living situation with the young people at the heart of every decision.

The families secured some investment to buy some homes for the group where they could be part of a community. They found three modern, new homes in an exciting new community, all close enough together for the group to support one another and set about finding the right support.

We’d worked with some of the families for a long time, so they approached us to manage the transition. It’s an exciting project as we’ll be supporting people at a life-changing time: the transition into adulthood and into their first home. We’ll be working closely with the families to enable the young people to grow their independence, take positive risks, and lead a fulfilling life.

The biggest challenge now, is finding the right staff. As it’s a brand-new service, we need to create a team from scratch. This is a unique project developed over several years, alongside young people and their families, so we’re hopeful we’ll be able to fill the roles in time for Christmas.

Anyone joining the team will have the opportunity to be part of developing a new service and create a great home for people. Having just left the family home, we’ll be supporting people to learn independent life skills as well as take part in exciting community activities, such as supported employment, sport activities, clubs, and even go to festivals.

Could you change lives?

This is a major milestone for the young people moving into their first home; to be part of it will be fun, challenging, and hugely rewarding. Think you’ve got what it takes? Find out more and apply in our jobs section.