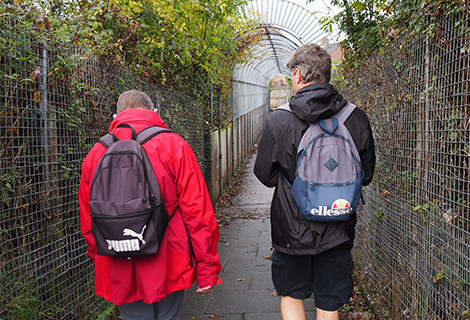 Over the last year Jon has expanded his horizons, even at a time when we have had our freedoms and activities restricted.

Through a care plan created by his Team Leader, Paula Bolter, and agreed with his sister, Jon’s support workers have helped him feel more confident and less anxious. Paula explains more in this insightful blog.

Jon has been with Brandon for a while and lives in his own house. He loves diggers, singing, train spotting and going on trips. A few years ago, Jon bought a car which meant we could help him visit parks and train spotting locations in Devon where he lives. This has been so valuable to Jon this year.

Jon’s journey through the pandemic

When we were able to go out again, Jon was nervous. Having the car gave him a sense of safety. He's gone from refusing to go out most days to going out twice a day, one trip is usually in the car and another could be a 4-mile walk around his neighbourhood.

When we’re walking in the town, we talk about all the cars we pass. Jon loves talking about cars and he is quick to point out the different coloured vehicles.

The future is blue

Jon is getting a new car soon and he was very clear that it should be a red or green car and no other car would do.

When it came to sitting in the showroom and choosing a car, Jon firmly and clearly said to the salesperson that his new car should be blue. So now, we’re now pointing out lots of blue shiny new Ford cars to make sure Jon knows what will turn up next month. He’s excited. When he sees one, he beams, chuckles to himself and says; ‘Jon’s new car’.

We’re helping him get used to the new normal in other ways too. Jon used to love going to a weekly disco, he especially loved the disco lights so we sourced Jon his own disco ball so he can have his own discos.

Each evening, we go through Jon’s diary with him and he has a whiteboard which shows who is working with him the next day. This means Jon feels in control and knows what activities he is doing the following day.

Paula explained, Jon’s journey over the last three years has been incredible and he is really enjoying his life. It’s been a really wonderful journey for me to be a part of and I feel lucky to be doing the job I do.

Join the journey. Find out more about our current job opportunities or read about some of the different roles at Brandon.