Autism Awareness Week - Moving out of the family home

This blog is part of a series of blogs and stories celebrating World Autism Awareness Week.

Aaron has autism and has taken the big step towards independence by moving into a new supported living house in Cornwall. Aaron has been supported by Brandon since he was young by our Children’s Enabling Service, so we were excited to find out how he was getting on in his new home.

Rebecca Silgrim, Aaron’s team leader, describes how well Aaron has settled into his new life away from his family home.

What are Aaron's favourite things to do? What makes him happy? 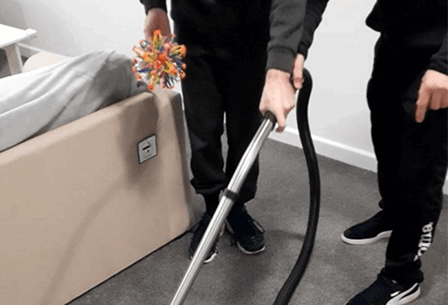 Aaron has a collection of items in plastic tubs that are very important to him, we know this as he carries them with him and has done this from a young age. It’s almost like a comfort blanket to him when the world around him becomes too much.

Aaron, through his autism, also likes to stim, he moves his torso around in circles and smiles.

What prompted the move to supported living?

Aaron had been living with his family, but he had reached an age where he needed more independence. He’d also been struggling with his epilepsy so it was important for him to have specialist care.

Were there any challenges? 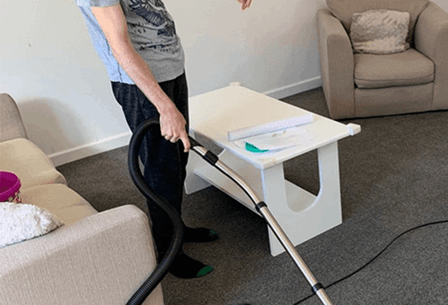 his is a massive step in anyone's life, moving out of the family home and going it alone. For someone who is autistic and non-verbal with epilepsy, it comes with a lot more challenges and anxieties.

Although we’d been supporting Aaron from a young age, it was only for short periods of the day so he was only used to his mum caring for him.

Going from short periods of support to having support 24/7 2:1, and doing all the personal care that ONLY mum did previously has been hard for him. This was made more difficult by COVID as it meant that his family, who he is really close to, could not come and visit. It’s an added stress on top!

We’ve worked closely with people who have known Aaron for a long time – his family and experts – and this input has meant he has settled fantastically well into his own home. We’re so proud! I really do respect how this young man has dealt with it. There’s been a lot of challenges but the small wins that have happened far, outweigh any hiccups.

How did you support Aaron to move?

We worked together closely with all the other people involved in his support. We held a lot of meetings with his disability nurse, his mum, Rachael McEwan - who is one of our positive behaviour support specialists, his occupational therapist, and Karen Lutz, our autism experienced practitioner.

As a team, we used all of the information we found out to make sure the accommodation would meet his needs. His occupational therapist did a sensory report, which gave us some really helpful environmental recommendations to help meet his sensory needs. I used this report and arranged a meeting with Karen who created a bespoke training course just for Aaron. We discussed ideas that will help him with personal care and touch, and making him comfortable in his new environment. Rachael supported us to come up with a plan to help the team feel more confident in taking care of Aaron, which in turn helped Aaron to feel more comfortable.

What have been the positive outcomes?

Aaron would never use the shower before and now he has taken that step! It was a huge outcome for Aaron to get in the shower in the morning as it’s something he has always struggled with. We were so proud that he has done it!
Aaron is hypersensitive to sounds and he struggles being in busy places around a lot of unpredictable things. His support team respect his sensory needs and take him to big open spaces for walks.

For Aaron, the world must be such a confusing place, especially during COVID and with such a big life change in moving into his new place. He has handled it really well and everyone is very proud of him.

Can you help someone achieve something special?

You could help other people like Aaron, to live independently for the first time. Find out about working for us and browse our latest job vacancies.