Running for a cause that's close to our hearts 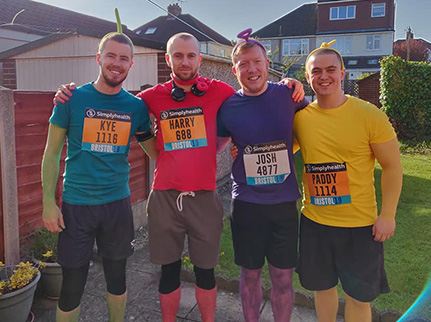 Mental health has always been a part of my life. I have suffered with my own mental health over the years and have known friends and family to have their own challenges. Campaigning and raising awareness around the help that's out there has become very important to me. I know where it can lead when you feel no one understands or can support you.

I take great pride in raising awareness so that everyone feels wanted and everyone feels supported – no one should have to feel alone. This is something I do both in my personal life and at work. I joined Brandon as a support worker in 2018, following a career change from teaching. When Brandon signed up to the Time to Change campaign in 2018, I was very pleased to be part of it by volunteering as a Time to Change Champion. We help spread awareness and change attitudes towards mental health by starting conversations with our colleagues and making sure they’re aware of the support that’s at hand.

Last year, an old school friend of mine tragically took his own life at the age of 23. He was suffering with depression and felt he had nowhere else to go. It was devastating when three of my close friends and I found out, but from it we saw an opportunity to do something positive in his memory and raise money and awareness for a local charity called Off the Record. They’re a mental health social movement by and for young people aged 11-25, living in Bristol and South Gloucestershire. To do our part, we decided to run the Bristol 10k on 5th May, 2019.

Initially we only set out to raise £500 or so, which was a target I’d achieved last year for Mind, the mental health charity. We thought this was a fair amount given the amount of people we knew and the fact our families would support us too. To our astonishment, we raised over £1,000 in just 24 hours. We couldn't believe the generosity of people and so we set a new target of £2,000 and agreed we would run in fancy dress as the Teletubbies, which was something we had done for Comic Relief whilst at school over eight years ago.

Across the weeks building up to the big race, we trained hard and we kept on setting the fundraising target higher and higher. If we hit £5,000, we said we’d run into the sea at Brean in nothing but very slim swimwear – which we did. At £5,500, two of my friends got their heads shaved to the scalp (I wasn't brave enough for this one!). 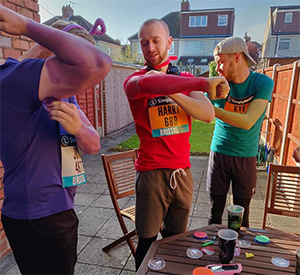 Six weeks of training and fundraising and the day of the 10k came. From the pictures, you can see we had fun painting ourselves up (just like we did in school) - getting up at 6am to do so! We headed to Millennium Square, in Bristol, for the race. The nerves began to hit as we neared the start time. It was a wonderful day for running - the sun was out but there was a relaxing chill in the air. We were off before we knew it. One hour later, we had completed it. The paint was running down our arms and legs from the sweat, but our friends and families were there to greet us. All of them were proud of us and we were proud of ourselves and each other.

Our final fundraising total was just short of £7,400. In just 6 weeks. Wow! The generosity of people amazed us.

The people at Off The Record told us we’d raised enough money for 620 one-to-one therapy sessions, each lasting 50 minutes. That's potentially 620 young people who might feel like they have nothing left, being given some hope and some desire to keep on going.

The raising of awareness never stops, however. We all want to do more to share the positive benefits of opening up and talking about our feelings.

Thank you to everyone for their help and their donations, and we hope that you can all continue to raise awareness in your own way. It's okay to not be okay. Someone will always listen.

Would you like find out more about the organisations mentioned in this blog?

Are you a member of Brandon staff and interested in Time to Change?